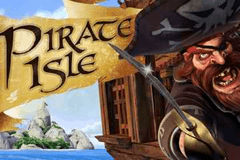 Pirate Isle is a fun-filled slot game developed by the talented people over at RTG. Of course, the pirate theme has been done before, so will there be any surprises in store that will determine whether or not we will find the buried treasure?

The pirate theme is strong when it comes to graphics and layout with the symbols adding their own feel to the concept. This five-reel slot has 25 paylines available to play with each spin, and be warned that their number cannot be adjusted. Oh, and to add to the overall feel they also throw in some cool music.

From the outset, this game comes across as being a whole lot of fun, and that feeling is enhanced when you look at the bonus features as they are different from the norm.

How to Play Pirate Isle

With so much going on when it comes to the bonus, it’s a relief to see that playing the actual game is so easy. Yes, you don’t even need to choose the number of paylines as all 25 are constantly in action, so what could go wrong? It takes just seconds to make your selection and you are then good to go.

This game has both wilds and scatters, but if you are expecting them to do the usual wild and scatter thing, then think again.

The skeleton key is the wild, and it does act like other wilds by swapping itself for other symbols. However, there’s also a group wild on the middle reel, and that’s going to double your wins.

It’s with the scatter where things get juicy on Pirate Isle as there are two scatters with both the galleon and treasure chest offering chances to land some bonuses. Here, you can win free spins, land multiple winning paylines and generally get some juicy wins. But that’s not all.

The bonus features with Pirate Isle are out of this world, and they are a huge reason why you need to check out this game.

Betting and Payouts for Pirate Isle

We love a slot with a wide bet range, and Pirate Isle won’t disappoint. It starts as low as $0.25 and climbs as high as $125. It does come with a progressive jackpot, so how much you could win is up in the air. However, the paytable is easy to understand, so at least you know what to expect when you land on various symbols after a spin.

Pirate Isle is one fun slot game, and you certainly feel as if you have been on an adventure. It’s fast-paced, offers ample opportunity to land winning paylines, and will give you a newly discovered appreciation for pirates and all of their treasure hunting ways.