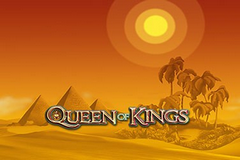 Queen of Kings is a slot game developed by RTG that offers you the chance to head back to the time of Ancient Egypt. Now, this is clearly not the first time Egypt has been used as a theme, so hopefully RTG has done something different from the norm.

Overview of Queen of Kings

It’s no surprise that Cleopatra is at the heart of this game while they also go big on the idea of riches and having things in abundance. The idea of the game is for you to win some of her riches, but she’s clearly not going to let go of things without a fight.

The game comes with 5 reels and 25 paylines. The paylines can be adjusted to allow you to play as few or as many as you like. We do love this flexibility, and we also enjoy the typical Egyptian symbols that are scattered around the reels. However, this part is no different from other Egypt-inspired slots, so we need to turn to the bonus options.

How to Play Queen of Kings

Playing the game is easy, and it only involves you carrying out a few steps. Simply choose the number of paylines you want to bring into the game, select your bet per line, and then check the total bet cost before hitting spin. This is a tried and tested layout, so nothing else to report here.

Bonus Features for Queen of Kings

The game comes with both wild and scatter options, but we’d expect that as some sort of base-level for any slot. Here, the wild is the scarab. It will swap itself in for other symbols around it to then create winning paylines, so this is the common practice for a wild. However, in this instance, it also acts as the top paying symbol, so you want to land five of them in order to grab the jackpot.

The scatter symbol is where things start to get interesting. Land at least three of them, and you will also trigger the Golden Scarab free spins section. This starts off with it giving you 10 free spins, but that’s not the end as it also allows you to grab some special golden scarabs. When you do, it gives you the chance to turn other symbols into expanding wilds with up to 15 available. As a result, it makes it easier for you to land some big wins.

Overall, while most bonus features are the same as other games, the Golden Scarab at least offers something different.

Betting and Payouts for Queen of Kings

The scarab is the top paying symbol, and that’s going to land you 4000 coins. The bet range for this game starts as low as 0.01 per line up to a maximum of $5 per line. That does mean you can play all 25 paylines for $0.25 up to $125, and that’s pretty standard. Also, it seems that this game has a variable RTP that moves between 91% to 97%, so that may influence your decision as to whether or not you want to play the game.

Queen of Kings is a standard slot game by RTG. It does offer a slightly different bonus game, but everything else is cut from other slots. If you love Egypt, then you will love this game.