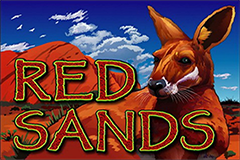 Developed by RTG, Red Sands is a slot game that’s going to take us off to the Australian Outback. At least this theme is different to most out there, so there is some hope that they will continue this different approach with some of the features of the game.

This game really does have an Australian feel to it all. The game itself has a 5×3 reel as well as a total of 20 paylines. The background is clearly the Australian outback with the red soil and there are a couple of kangaroos at the top of the reels to keep you company.

The theme is continued with the symbols used on the reels and even though the majority are the card symbols, there are various Australian-based animals such as koalas, a kangaroo, and a wombat to just keep that theme firmly in your mind.

How to Play Red Sands

To set up this game, you need to follow a few simple steps. First, you want to click on either the up or down arrow on the bet button to change the value of your bet. Next, you want to select the number of paylines that you would like to bet on. The total bet you then the place is determined by the bet size being multiplied by the number of lines. If you are happy with everything, you can either hit the autoplay button or just hit spin to set the reels in motion.

This game does offer both wilds and scatters, so at least there are some bonus games for us to talk about. The wild in this instance is the kangaroo and he’s not only going to double your winnings, but he will also substitute himself for any symbol aside from the scatter.

Talking of the scatter, it’s the Australian moonscape symbol that plays this role, and it’s going to act as both the free spin activator as well as a win multiplier. You need to land at least 2 scatter symbols to win up to 10 free spins while the multiplier can go as high as 50x if luck is on your side.

Betting and Payouts for Red Sands

The coin value available on this game starts as low as 0.01 and climbs to a maximum of 1. However, it’s the jackpot that’s impressive as you can win up to 10,000 coins, so if you are playing with the maximum bet, then you can have quite the windfall. One other cool thing to mention is that the RTP is 95%, so there’s every chance you will land some kind of win on quite a regular basis. In order to win the jackpot, you need to land 5 kangaroo symbols on a payline.

Red Sands is certainly an easy enough slot game to play, and the theme is also quite pleasant. It doesn’t offer much in the way of the gameplay being different from normal, but it does all of the basics well while offering you ample opportunity to get some wins on quite a regular basis.