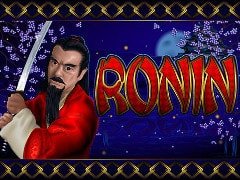 Ronin is a slot game by RTG that’s going to take you off to the land of the Japanese Samurai warrior. This game ties into Japanese folklore where warriors without a master became known as a Ronin, but then it’s how the game plays that we are more interested in.

This game has a 5×3 reel and it also offers a total of 20 different paylines. The backdrop is perhaps best described as being a typical Japanese scene, and then there are the reels themselves as they are covered in symbols that are clearly connected to the theme. Watch out for the likes of horses, helmets, swords, flags, and ronins themselves. Also, the sounds will remind you of where you are located in the world, and overall this is a well put together theme that sets you up perfectly for the game itself.

How to Play Ronin

To play this game, you need to go ahead and select your bet size before you do anything else. Also, you need to decide on the number of paylines with this ultimately setting your bet, and this is all achieved by clicking on the up or down arrows next to the corresponding button.

There is one strange thing about this game, and it surrounds the bonus options. The Ronin symbol acts as the scatter, but it also exchanges itself for other symbols, and that’s unusual. Apparently, the wild symbol is represented by koku, and that can exchange itself for any symbol aside from the scatter. However, it only appears on reel 3 although any prize is doubled in size.

So, while there’s one wild and one scatter symbol, they both pretty much do the same thing as one another. In saying that, what you really want to happen is to land a koku and two Ronin symbols together because when you do, it leads to one of several options happening.

First, reel 3 can be held during respins that can number between 3 and 10. If you then land 2 Ronin symbols during a spin, it’s then going to be retriggered with the number of spins once again being chosen at random.

Next, you may win 5 free spins, but a prize multiplier increases with each spin. This can be retriggered, but only on one occasion.

Finally, another feature is the ability to win 25 free spins as well as a 3x multiplier.

Betting and Payouts for Ronin

Ronin is a pretty cool game, and at least the bonus features are different to what you would tend to see elsewhere. The payouts are also quite impressive, but this always depends on the size of your initial bet. However, no matter how big or small your bet is, this game is well worth checking out.