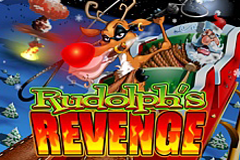 Rudolph’s Revenge is a cool slot game by the guys at RTG which kind of feels as if it forms part of a trilogy of similar games focused on Rudolph. This is a game that carries the concept of Rudolph being vengeful, and that Santa better is on the lookout. While this doesn’t sound very festive, we can see if there’s anything else different about this slot game.

The idea here is that Rudolph is fed up with the way things are being run, and he wants to change. Also, the game kicks off by introducing a nuclear bomb and Rudolph being ready to leave the North Pole for good. The game contains 5 reels while it also offers 50 different paylines. The reels are set against your typical snowy backdrop while the graphics for the symbols are bright and colorful. Do lookout for the likes of Rudolph, elves, the usual card symbols wrapped up like presents, and then an actual present bomb.

How to Play Rudolph’s Revenge

To play, you need to be aware that RTG has taken a completely different approach to this game in that both the bet and number of lines you can play are fixed for you. Basically, you just need to make sure you have money in your account and then hit the spin or, to speed it up a bit, hit the autoplay button to make life easier for you.

The game does come with both wilds and scatters, and it’s Rudolph that’s going to act as the wild. Here, he swaps himself in for any other symbol aside from the scatter in order to bolster your chances of landing a winning line. If he does create a winning line, then the prize you receive is also going to be doubled.

The scatter symbol in Rudolph’s Revenge is represented by the present bomb. While it will also boost your prizes, the key is in landing at least 3 scatters to then open up the free spins part of the game. Here, you get 7 free spins along with a 2x multiplier, but then it can also bring into play the Rudolph substitutes. This can lead to Rudolph exploding onto the screen boosting the number of lines you could then potentially win.

Betting and Payouts for Rudolph’s Revenge

As everything is set for you, it’s easy to know what this is going to cost when it comes to placing a bet. You are going to end up betting a total of 2 coins per spin, and while it does mean you may feel impeded by the lack of ability to choose what you bet, it does make it easier to settle on your budget and to then get on with playing the game. Also, the top winning line is 5 Rudolph symbols where you will then win whatever the progressive jackpot is sitting at right at that moment.

Rudolph’s Revenge is a strange slot game. The theme is unusual and yet the bonus features are almost the same as you see elsewhere. Also, this act of setting the bet option for you may put some people off even though you at least know you can’t gamble more than you intended by accident.