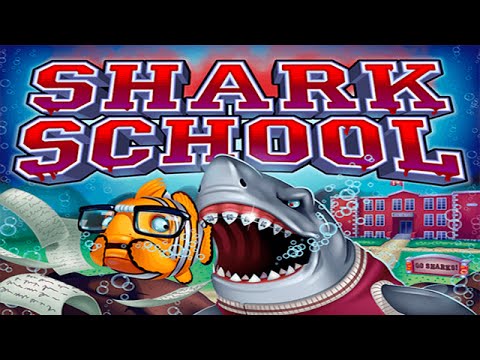 The first thing that hits you with Shark School is that you are clearly being thrown into an underwater world. Of course, that’s not a surprise when you look at the name, but then will there be anything in the game that could be different from the norm?

The game itself comes with 5 reels and a total of 50 different paylines. The reels do take up the overwhelming majority of the screen, so there’s the little backdrop of note even though it’s supposed to be a school for fish. However, you do see the surface of some water, so there’s at least an indication of the theme. The key is in the symbols as this is where you come across the octopus teacher, various fish going to school, and the common card symbols that make up the lower-paying wins.

How to Play Shark School

To play, you need to choose your bet size and the number of lines by clicking on the appropriate up or down arrows beside the relevant buttons. As you change the values, check out how the total bet cost changes at the bottom of the screen. This lets you know what you will be spending before hitting the spin button.

The game does have both wild and scatters, and for the wild, it’s the octopus that’s going to be the key symbol. This symbol will only pop up on reel 1. When it appears, it’s going to substitute itself for every other symbol around it, and this includes the scatter. The aim is to then hopefully land some extra winning lines as a result.

The scatter is represented by the school, and one of the first things that it will do is multiply your bet. Land at least 3 of them, and you are going to kick into action the special Pick feature. Here, you get 3 schools to choose from, and behind each one is a special feature with either ‘Swim Fishy Swim’, ‘Bad Sharky’ and ‘Don’t Eat the Teacher’ being the options.

With Swim Fishy Swim, you have a small fish being chased by a shark. The fish is several steps ahead, and you get 25 free spins during which time the fish either escapes or is caught. Any prizes are tripled, and if he escapes then you win 200x your bet.

With Bad Sharky, you can receive anywhere between 3 and 10 re-spins, and the shark symbol is going to completely cover reel 3. If a fish appears on the reels, then the shark eats him and replaces the fish with himself.

Finally, with Don’t Eat the Teacher, you get free spins and a multiplier. If a shark lands on reel 5, then he tries to eat the teacher symbols. If he does, then the free spins end, but if the teacher escapes then it can be re-triggered.

Betting and Payouts for Shark School

Overall, this game at least does something different with the bonus features, and for that alone it is well worth checking out.