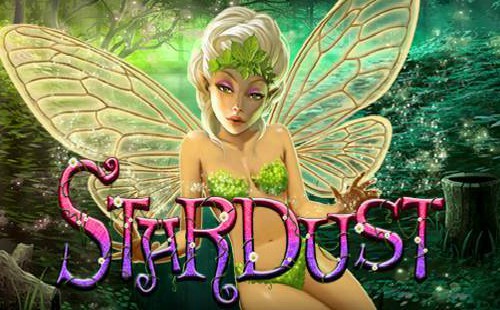 Stardust is a slot game developed by RTG with a distinctly fairy-inspired theme. Now, this isn’t breaking new ground, so you do hope that there is more than a healthy sprinkling of fairy dust that will allow this game to stand out from the crowd.

The game comes with the common 5×3 reel setup but it also offers an all-ways pay outcome. That does mean you stand a fantastic chance of going ahead and landing some winning lines with pretty much every spin. The reels themselves are set against a mystical forest background, which comes as no surprise. Also, the symbols stick firmly with the theme, so expect to see different fruits of the forest, fairies, elves, and other mystical symbols that keep you intrigued.

How to Play Stardust

Playing this game is easy. You only have to worry about placing the size of your bet since all lines are constantly activated. Click on the plus and minus buttons beside the betting aspect to change the value. Apart from that, you need to hit the spin button to set everything into motion.

One cool thing is that this game does have several bonus features to help keep you entertained.

First up is the lucky feature, and this can be triggered after every spin on the main game. If it is triggered, it then turns reels into expanding wilds along with adding an extra bonus.

Talking of wilds, it’s the green fairies that are the wild in this game, and they are going to act like a normal wild and substitute themselves for other symbols aside from the scatter. Also, look out for the green fairies turning into blue fairies as that means a special multiplier has been added where wins can be paid out at up to 4x the normal rate.

The game also has a free spins option, and that’s triggered by the willow scatter. By landing 3, 4, or 5 scatters, it equates to winning 8, 15, or 50 free spins. But there’s more to it than that. This feature can be re-triggered, and after each free spin you are giving a reel full of wilds, so the chances of landing some impressive wins will sky-rocket.

Betting and Payouts for Stardust

The jackpot in this game is set at 2000X your initial stake. Also, it has an RTP in the region of 96%, so that’s slightly above the average for this type of game. The betting range is set between $0.4 and $20, so the maximum is lower than you may have expected. That does then show how big the potential jackpot can be, but you do need to be playing the maximum bet to land that prize. You want to land the green fairies to win the jackpot.

Overall, this game is quite good even if you aren’t into fairies or the theme in general. The bonus features are very generous, especially when it comes to the free spins as those expanding wilds are a nice addition.