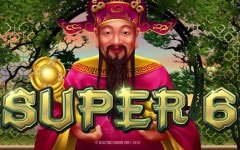 Super 6 is an exciting Asian themed slot from the stables of Realtime Gaming (RTG). RTG is perhaps the most popular software provider for US online casino players, which is also known for its exciting storyline and huge winning potential. But sadly, not its graphics prowess. In Chinese culture, six is considered to be a lucky number, which is depicted in the Super 6 slot game-play.

As earlier stated, Super 6 is themed around Asia, more specifically China. If you are familiar with Zhanshi slots, then you should have a clearer picture as to what Super 6 looks like, though there are differences. It is a very simple, yet meaningful slot. Old-Chinese culture is represented by characters like old-time tournaments, spring-operated fans, fierce dragons, Koi fish, lotus plantations, flashlamps, etc.

In the area of creative patterns or outlay, much should not be expected. However, its bonus features and “All Ways Pay” format are standout features of this slot. Its visual representation is not the most eye-catchy, but it does a great job in bringing to life the Chinese culture, with beautiful East-Asian music in the background.

How to Play Super 6

Super 6 offers 729 ways to win, with 6 reels of action. The slot design is very simple so you should not experience any difficulty playing. Per spin, you can wager a minimum of $0.03 and a maximum of $30. You can choose to spin manually or take advantage of the autoplay feature that allows for as many as 1,000 spins to be preset.

Super 6 offers more winning combinations than other slots from Realtime Gaming. With regards to winnings, you should not expect much in the base game because of the number of possible ways to win. But with the bonus features, your winning potential is so much greater as there are several bonus features available. Some are;

The letters of the name of the game, when spelled out, are what represents the Scatters. That means you should be excited anytime you see either or a combination of S, U, P, E, R, 6. These letters cover all six reels, making it easier for you to get them and resulting in additional wins. Getting four, five, or six Scatter icons consecutively anywhere across the reels will trigger free spins. Free spins double your winnings and have a five times multiplier attached.

For four Scatters, you get eight free spins. For five, you get twelve, while getting all six will reward you with up to twenty-five free spins.

The Wild icon is represented by a coin. As these coins appear on reels two to six, they replace standard game symbols except Scatters and can multiply your wins by as much as five times. There is also the Emperor Wild symbol that triggers the jackpot. If you manage to land six Emperor icons anywhere on the six reels, you get 1,000 coins. With Wilds in the combination, you can win up to 2,000x your bet, which is an equivalent of 60,000 coins or $125,000 max.

Super 6 is optimized for both desktop and mobile gaming. There are no differences in both versions as they present the same graphics and serene music. The slot has a 96% Return to Player (RTP) ratio.