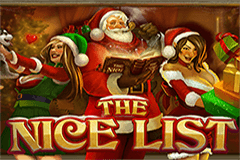 Every day is Christmas with the Nice List slot game from RealTime Gaming (RTG). The game’s background takes a picturesque holiday setting with a Christmas tree on the left, a fireplace with socks hung over the edge, a wreath, a dog, a cat, and a hot pot.

Apart from that, the Nice List has top-notch graphics all over the reels with symbols that appear as if they are from the Hallmark holiday card. The look is detailed but subtle, creating a warm and welcoming atmosphere for players. As a low volatility slot game set in a holiday living room, the Nice List keeps you feeling festive throughout gameplay.

The Nice List slot has five reels and 243 fixed paylines. You thus don’t have to adjust paylines to a lower or a higher number. Instead, you only need to change the bet amount from $0.50 up to $12.50 and press the spin button for reels to start spinning. Payouts are released when three or more similar symbols appear on the grid from left to right.

Symbols include different colored gift cards with K, J, Q, A, 10, and 9 on them. Other icons include a book with the Nice List written on it, a living room showing a fireplace and bottle of wine, cookies alongside a glass of milk, and a girl holding Christmas presents. Ideally, the playing card symbols are split into three paying categories.

Santa Claus acts as a wild symbol and appears grouped on reels 2, 3, 4, and 5. The Nice List icon represents the scatter symbol that multiplies your bet by 1x for two symbols, 10x for four icons, and 500x for five scatter symbols. When you get three or more scatter icons, the game triggers the Nice List feature or Santa Spins.

If you reveal Nice List Feature, you get ten free spins and a chance to choose two extra rounds, 2x or 3x multiplier, expanding wild or extra wild from 20 hanging stockings. Another bonus is the Lucky Feature triggered at any point when you spin a reel. This function rewards you with 5-10 free spins and a 10x multiplier.

The Nice List slots are available on various devices, including tablets, iPhones, Mac, Android, and Windows. The graphics are high-end on multiple devices, thanks to the optimization done by RTG.