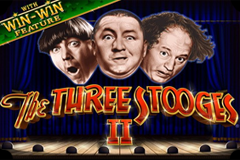 The Three Stooges II slot game title is deceptively confusing but with exciting features to cover for the name. The game is similar to the first RealTime Gaming (RTG) release, the Three Stooges Brideless Groom, making this sequential.

Overview of The Three Stooges II

This 2014 release features three stooges’ faces similar to ones in the popular American comedy film released in the 20th century. The three stooges II comes on a 3×3 grid with three fixed paylines. As you immerse yourself in this traditional set progressive slot game, you’ll find it impressive, thanks to graphics, background, and the size of the symbols involved.

When you land three Moe symbols on the reels, the Moe Moolah Feature is triggered. The prices awarded depend on how many levels you have played. This is the most valuable feature, rewarding players with a combination of free spins and multipliers. If you get 25 free spins, you’ll also get a 5x multiplier.

The other feature is the Larry Stash, triggered when three Larry symbols appear on the reels. The feature rewards similarly to Moe Moolah but with lower value packages. Lastly, the Curly Cashola Feature rewards you with nine free spins and 2x multiplier when Curly emerge anywhere on the reels.

How to Play The Three Stooges II

The gameplay at the Three Stooges II slot game is exciting following the layout of the grid. Although it is a 3 by 3 layout characterized by low variance and up to 97 percent RTP, every function is perfectly placed with spin, autoplay, and bet control buttons at the bottom of the reels. The balance, bet amount and win windows are at the top, while the jackpots information is placed just below the window. With all the crucial functions on the layout, players’ gameplay is easy, starting with inputting wager amount from $0.10 to $5 per payline or $15 on all paylines.

You can begin to get the wins by pressing the spin button or autoplay. Payouts are released when three similar symbols emerge on a pay line. These symbols including a vintage blue car that awards 30 coins, diamonds and cherries giving 10 coins for individual combination, lemons, BARs, or7s reward 5 coins, clapperboards awards 20 credits, Larry Moe, & Curly, stooges studio gives 50 coins. The three stooges II also has a wild symbol, which increases wins’ value when it replaces other symbols.

Compatibility of The Three Stooges II

The three stooges II is a mobile-compatible game, which means you can play it on Android, iPhones, and iPads. Other platforms you can use include Mac, Windows, and desktop.