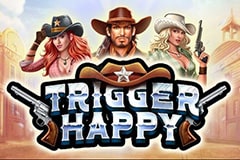 Launched in 2019, Trigger Happy progressive slot game is a release by RealTime Gaming (RTG). The game’s theme is inspired by the Wild West, set in a desert environment filled with wooden houses. Trigger Happy slot focuses on two seductive cowgirls, one blonde and the other redhead, each placed on the right and left of reels.

The reels’ surrounding looks like a wooden stage made from wooden planks and embellished with ropes. Ideally, the game setting looks like one of those cowboy/girl bars with barrels placed somewhere in the room. The game’s developer has also added several Wild West-themed soundtracks, enhancing optimal western experience. This highly entertaining slot game comes with lots of bonuses and tons of lucrative features.

How to Play Trigger Happy

As a medium volatile game, Trigger Happy is five reels 30 fixed pay lines. It requires a minimum of $0.01 per line where the total bet amount is $0.30 while the maximum is $0.10 per line with a total bet been $3. Once you adjust the amount, you can press the spin button to begin.

The sheriff’s badge is the scatter symbol paying up to 100x the bet amount when five appear anywhere on the grid. Lastly, look out for two cowgirls, the blonde and redhead, who act as wild symbols. The redhead appears on reels 1 and 2 and replaces other symbols on the same reels except for the scatter symbols. On the other hand, the blonde pop on reels 3 and 4 to substitute adjacent symbols. These wild icons appear stacked to boost your win lines.

Playing Trigger Happy slot game can randomly activate the Lucky Feature that awards 5-10 rounds or the Trigger Happy free spins bonus. Trigger Happy feature is also triggered when you land three scatter symbols. Once activated, players get seven free rounds plus other features provided by one of the two cowgirls you pick.

If you pick the redhead, she fills the first reel with wild or become the scatter symbol. If you choose blonde cowgirl, she’ll fill reels 4 and 5 with sticky wilds.

The Trigger Happy slot game is optimized to be played on desktop and mobile devices. Whether you have Android, iPhone, Mac, iPad, or Windows, you can enjoy Trigger Happy video game. Android users can play the game on the go, thanks to RTG’s Android App. Other device users have to play the game instantly on various browsers. This action-packed slot game also comes with two jackpots, Major and Minor that are randomly triggered after any spin. The Minor jackpot starts rewarding from $250 while the Major rewards up to $1000.