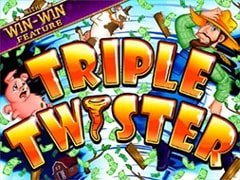 Launched in 2009, Triple Twister is a release by RealTime Gaming (RTG). The online slot features five reels and fifty fixed bet ways, making a modest slot for pro gamers. Triple Twister is based on a tornado theme and cartoon graphics to bring out the twisty farming side in real life. Ideally, loading Triple Twister takes you to a feel and look of a farm setting filled with items present in a farm as game’s symbols.

Triple Twister is a vibrant video progressive jackpot with fast gameplay as with most RTG slot games, which ensures an exciting experience. With the exceptional graphics and multiple ways to win, this progressive slot will literally blow your account as tornados affect featured characters, including the farmer and his wife.

How to Play Triple Twister

Bet range on Triple Twister doesn’t comprehensively serve low rollers as it comprises 50 fixed paylines. Instead, you must be willing to spend from $0.50 and a maximum of $250. The coin denomination ranges between 0.01 and 0.25 and is modified by pressing the spade icons beside the bet tab. Once the bet is set, you can press spin or autoplay for the reels to turn and create winning combinations.

Other special symbols are available on this online slot machine, namely the scatter and wild characters. The twister icon serves as the game’s wild and replaces all other symbols, including weather vanes, a scatter symbol. Wild symbols appear only on the third reel and expand to cover the entire reel replacing and creating winning combinations. The scatter also comes with better wins, especially when it appears alongside the twister icon.

The first feature you’re likely to trigger while playing Triple Twister is the feature plus award with 0, 9, or 33 coins and nine free games when two scatter symbols emerge on the third reel. Another feature is the win-win that applies when the win results from free spins are less than ten times the bet amount.

If the feature activates, players can win between 2x and 100x their bets. Lastly, you’ll get the Skill Stop Spin feature, which allows you to press a button and stop a spin. You have to be fast to get matching symbols on a payline by the second you click the stop button.

Triple Twister is playable on various devices. Although the game was not compatible with mobile devices initially, you can now use your Android or iPhone devices to play instantly or download to play later. You can also play this video slot game on desktop, Windows, Mac, and various tablets.

The Triple Twister video game is armed with two progressive jackpots, with each winning increasing every time you bet. The two jackpots, minor and major, activates randomly at the end of any spin. As you progress with playing this vigorous lucrative video slot, the jackpot value will increase and show on tabs placed above the reels. The winnings are added to other base game winnings.