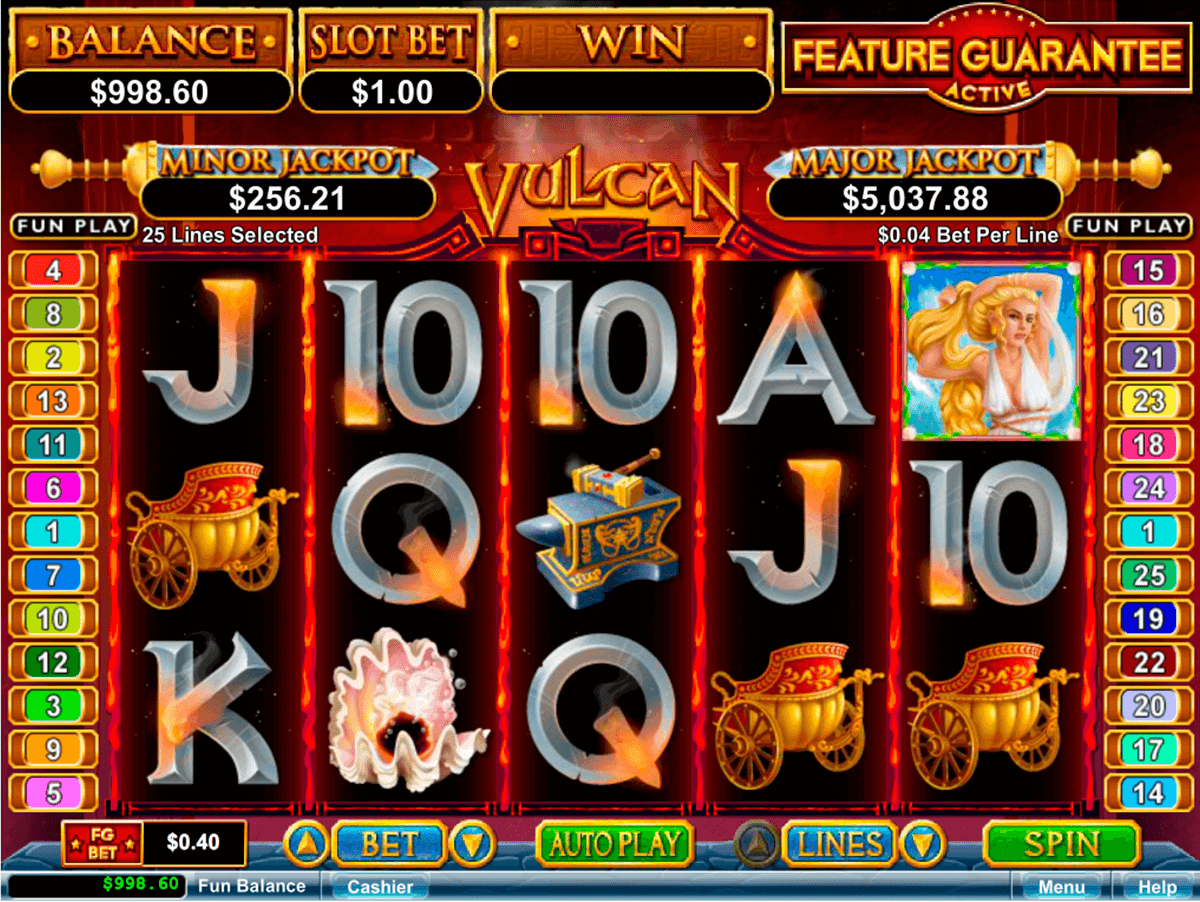 Launched in March 2015, Vulcan is a highly entertaining, mythology-themed, video slot game that offers players solid gameplay and tons of lucrative features and bonuses. The name ‘Vulcan’ originates from ancient Rome and directly refers to one of the 12 Olympian Gods, Vulcan, who’s also known as The God of Fire.

A master blacksmith, Vulcan’s role among the Gods entailed forging weapons, anvils, and ornate jewelry for the other Olympian Gods. RTG did a great job in bringing this mythology to life by incorporating various elements and aspects of this mythos into the game.

Apart from paying homage to the God of Fire, the game also serves as a reminder of Europe’s deadliest volcanic eruptions, the Vesuvius eruption which claimed thousands of lives. A highly engaging video slot game, Vulcan sports a great design, solid gameplay, and numerous impressive features.

How to Play Vulcan

The animation and graphics in this game have been superbly done. The burning reels help add that mysterious and divine aspect into the game.

Being a standard RTG title, Vulcan comes with 5 reels and 25 flexible pay lines. If a player manages to land three or more scatter symbols, then they will automatically qualify for free spins.

Once the free spins feature is activated, then the screen will automatically change from fiery red to ocean blue. Venus is the game’s highest paying symbol. A medium volatility slot, Vulcan has an RTP of 91% to 97%, with the difference in the RTP rates coming down to several factors including the length of play.

The most popular symbols in Vulcan include oysters, chariots, goddesses, temples, anvils, and high-value playing cards which help bring about this ancient Roman tradition and mythology.

Vulcan which is the game’s wild symbol helps create winning combos and only appears on the second and fourth reels. Upon landing the wild, the resulting winnings will automatically be added to an x3 multiplier.

Vulcan’s home which is the volcano serves as the game’s scatter symbol. Landing three or more volcano symbols will automatically activate the ‘Fire of Gods’ bonus game feature which awards players with 15 free spins. If the player spins a winning combination during the free game, then their winnings will be doubled.

Vulcan is compatible with various devices including mobile phones, PCs, iPads, or laptops, thus players can access the game either by downloading the game directly from Google Play or by using the instant play option.

RTG has done a great job of producing yet again another solid title. Although the game might appear somewhat gimmicky, it still can deliver some amazing prizes when a playing session lasts for long.