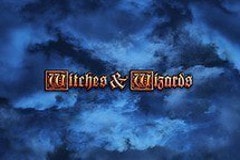 Witches and Wizards is a popular RTG title that brings to life a whole new and enchanting magical world never seen before. Unlike most Halloween themed slot games, this title can be described as minimalistic due to the fact that RTG went easy with the graphics and animations.

Overview of Witches and Wizards

This is not to say that the game is not engaging. As a matter of fact, it’s the simplicity of the game that makes things even more interesting. With a simple but atmospheric backdrop, Witches and Wizards offer players plenty of bonuses and winning opportunities. Animations and graphics in this slot game have all been brilliantly done. The game’s backdrop features huge smoky clouds moving slowly while ornate skulls and symbols dominate the game’s tiles.

How to Play Witches and Wizards

Witches and Wizards slot game like most of the RTG slot games comes with 5 reels and 25 pay lines. To alter the bet and line amounts, the player will have to use the up and down arrows. However, unlike other slot games, this feature is slightly hidden and thus the player has to first get into the settings page. The coin range for this slot game is 0.01 and 5.00 per spin and the minimum bet that can be made is 0.25 while the maximum bet that can be made is 125. To lock in the bet, the player will have to press the spin button or alternatively use the autoplay mode.

Bonus Features for Witches and Wizards

Witches and Wizards feature a variety of symbols including witches, spellbooks, wizards, cauldrons, and a few other magical elements to keep the game’s Halloween theme alive. The cauldron, which acts as the game’s wild symbol can replace all the other symbols in the game to create a winning combination except for the scatter symbol.

In addition, the wild symbol will also double up any prize by substituting any icon in a winning combination. The staff serves as the game’s scatter symbol. When three or more scatter symbols appear on the reels they will activate the bonus feature where players will get to enjoy 10 free spins. These wins are then multiplied by the total bet made and paid in pay line wins.

Compatibility of Witches and Wizards

Witches and Wizards slot games can be accessed on all devices. Whether a player is using a smartphone or a PC, he or she is able to gain access to the game.

Filled with lots of magic, intrigue, and mystery, anyone who enjoys this genre will appreciate Witches and Wizards. If you are a regular RTP player, then you are going to be familiar with the format of the game’s bonus round. It’s also important to point out that Witches and Wizards are not only perfect for anyone who is just starting out but also quite stimulating for the most experienced players.