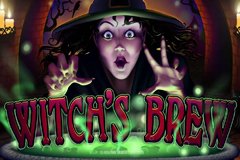 Witch’s Brew is a fun Halloween-themed video slot game developed by RTG that’s set in a rather creepy basement. It revolves around a witch who’s determined to stay away from the rest of the world with the hopes of casting her magic and spells on unsuspecting people. Although the Halloween theme has been done from time to time, RTG has gone that extra mile to ensure that this title stands out from the crowd.

A highly immersive slot game, Witch’s Brew represents all things Halloween, mystery, magic, and fantasy. The opening scene is characterized by advanced animations and a rather spooky soundtrack. The game’s eerie theme is what makes the title truly special, as it presents players with a different kind of gaming experience.

Try out Witch’s Brew and get a glimpse of what the witch is up to in her cauldron.

How to Play Witch’s Brew

Witch’s brew slot comes with 5 reels and 25 pay lines. To get started, players need to come up with their bet and line amounts. After a player is satisfied with their bets made, they can then proceed to spin by clicking on the spin button and the reels will start moving. The game also comes with the Autoplay feature, which allows players to play the game on autopilot.

Switching on the auto-play feature will make the game run faster. A player’s scatter wins are multiplied by the total bet and then the wins added to the pay line wins. If the wild symbol substitutes any symbol in a winning combo, then the player’s winnings will be automatically doubled. The minimum bet that a player can place per line is 0.01. Also, there is a 3-speed function feature which is slightly different from the turbo/slow speed function offered by other slot games.

To land the elusive progressive jackpot, players will have to match 3 pumpkin symbols along the pay line.

Reels in this engaging slot game feature mysterious elements such as candles, cloths, bags, toads, dragon fangs, and black cats, all bringing out the spooky Halloween theme. The witch and the dragon fang are the game’s wild symbols and appear only on the second, third and fourth reel. In case one or more wild symbols appear on the reels, then the prize is automatically doubled.

Wilds may appear grouped on their respective reels during free games, in the process doubling the prize. The Goblin Blood is the game’s scatter symbol and is added to line wins before being multiplied by the total bet. If three or more goblin blood symbols appear on the reels, then the player may receive 10, 25, or 125 free spins.

Players can also play Witch’s Brew directly from their browsers or download the game to their mobile phones.

Witch’s Brew is a highly engaging slot game that comes with an impressive win potential. Being a low volatility slot game, Witch’s Brew is a treat to play especially with the 125 free spins. If you love games revolving around witchcraft and wizardry then you should try out this game.