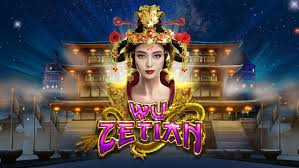 Based on the life and antics of an infamous Chinese empress, Wu Zetian is a well designed classic 5-reel slot game that comes with 25 fixed pay-lines and plenty of bonuses. The overall design of the game takes the players back to the golden age of Imperial China, while the volatility of the game serves as a reminder of the ruthlessness of the empress.

Historical documents describe the empress as harsh, coldhearted, and conniving. It’s believed that the empress butchered her family members including real brothers, her sister. Set in a well-designed imperial court, players will certainly be impressed by the glamour of the court which is enhanced by jade lions and beautiful jewelry.

While everything is glam in this game, Wu Zetian is undeniably one of the most challenging slot games, making it suitable for those players who are constantly looking for a challenge.

How to Play Wu Zetian

Bets in Wu Zetian slot game start at 0.25 all the way up to 62.50 credits per spin. On top of that, Wu Zetian slot game also comes with an amazing payout of up to 50,000x the bet placed making it one of the highest paying jackpots. This payout is made possible because of the variance that comes into play as players spin and match symbols.

At times, symbols will appear much larger, thus they tend to take up 3×5 of the reels, interacting with other lines to reward players huge payouts. Unlike other RTG titles, in Wu Zetian slot game most of the money is won during the game rather than in bonus rounds. It is also important to remember that the game has no progressive jackpot. The game also has an RTP of 95.5%, which is slightly lower in comparison to other slot games.

The game features a variety of symbols such as jade lions, horses, jewelry, lanterns, and jewelry boxes, which complement the overall theme of the game. The jewelry and jade lions enhance the glamour of the court. The Pearl serves as the wild symbol and it can appear on all the reels except on the first one. At times the pearl may appear to be a regular-sized symbol while on other occasions it can become super-sized.

Golden Gong is the game’s scatter symbol. When 3 or more Golden Gongs appear on the reels, players will earn 5 free spins. The higher value symbols in the game include advisors, warriors, and the empress Wu Zetian herself.

Apart from the game’s impressive aesthetics, Wu Zetian also offers players high-payouts and plenty of thrills. Without relying on any tricks and gimmicks, RTG has clearly done a great job of taking an existing concept and making it much better. However, it’s important to note that Wu Zetian is one of the most challenging slot games and thus it’s not suitable for inexperienced players.