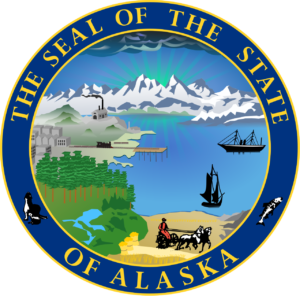 The Alaska state code does not mention online poker, gaming, or sports betting at all. The games are also not regulated by the state, which makes the legality of the games played by Alaskans a bit murky.

GETTING TO KNOW ALASKA AND ITS GAMBLING HISTORY

Is any type of online gambling legal in Alaska?

Alaska is the northernmost state of all of the United States, not bordering any other states as it is located along the western coast of Canada, with the Pacific Ocean to the south. The Bering Strait on its northwestern tip allows it to share a small border with Russia.

There is very little gambling that has been legalized by the Alaska legislature. The state does not even have a lottery or any type of pari-mutuel betting. There are some contests that are allowed by the state, such as snow machine racing and ice fishing, but there is no betting permitted on those events. Even cruise ships that are in Alaskan waters must cease any gambling activities until back out on the open sea.

Bingo is permitted in Alaska, as are some types of social gaming in individual homes. For example, the law states that a person seeking defense in a gambling case as a player can claim he or she was playing in a social game only, as the law specifically states that it is a viable defense. This is going to be situational, however, and is likely only plausible for charges involving minor amounts of money.

The passage of the Indian Gaming Regulatory Act (IGRA) of 1988 by Congress allowed any Native American tribes in all states, including Alaska, to develop new compacts that permit gambling on reservations. Several Alaska tribes did so. Since then, little more than a handful of establishments have opened, though they are limited in scope to games like pull-tabs and bingo. Without the ability to offer table games like poker or slot machines, the Indian gaming centers remain fairly small and scattered throughout the state.

There are several key definitions in Chapter 11 of the Alaska statutes. The gambling definition is rather standard, but the contest of chance is specific enough that it could be utilized in arguments to legalize table games in land-based casinos or online, as well as sports betting and other games like daily fantasy sports (DFS). That definition for a contest of chance is as follows:

“A contest, game, gaming scheme, or gaming device in which the outcome depends in a material degree upon an element of chance, notwithstanding that the skill of the contestants may also be a factor.”

Gambling is rarely a topic up for discussion among lawmakers. There were a few instances in past two decades that the legislature has voted on bills to allow one or more casinos or establish a statewide lottery, but one half of the legislature always kills the proposals.

However, the issue has been put to voters on a number of occasions. In 2005 and 2006, voters rejected a ballot measure to legalize the lottery. In 2008, a larger gambling measure was put before voters for establishing the Alaska Gaming Commission and allowing more gambling throughout the state, but approximately 60% of the voters turned it down.

While the state seems very unlikely to allow any significant ambling expansion in Alaska any time soon, the legislature may have to address daily fantasy sports and other types of sports betting. DFS is currently offered to Alaskans by major companies, and the US Supreme Court open the doors for every state to legalize sports betting. There is a chance for those games to be considered and possibly regulated within the state, but it will require a major change of attitude by lawmakers and voters alike.

Yes. There are a number of sites that do offer these games online for the convenience of Alaskan players and bettors.

No. There is not enough gambling done from within the state of Alaska to warrant an investigation into online gambling. Law enforcement typically allows social gambling in homes, so it is unlikely that officials would question what people do on their computers from within those homes.

No. If any type of enforcement took place, it would be aimed at the online gaming or sports betting operators, not the individual players who simply participate via the internet in the privacy of their homes.

The sites recommended here have long histories of trustworthiness and prompt payments to players. Should any site be forced or even choose to leave the Alaskan market, there would be methods by which players could access their funds and make withdrawals.

There are various methods offered by different sites by which players can deposit and withdraw funds. Some deposits are allowed by credit card, and bank transfers and ewallets are typically options as well. Customer service representatives will assist customers to ensure timely deposits, as well as withdrawals. It should be noted, though, that the most popular method for all transactions among new players is cryptocurrency, specifically bitcoin, as it bypasses banks and their fees.