North Carolina’s laws do not specify that online gambling is legal or illegal in the state code.

In the southeastern region of the United States, North Carolina’s east coast is the Atlantic Ocean, with Virginia to the north, Tennessee to the west, and South Carolina and Georgia to the south. 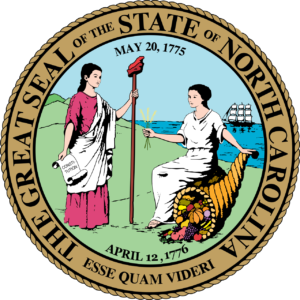 North Carolina has never been very friendly to gambling or open to legalizing many forms of it. Charitable gambling has been legal for some years but it very limited and includes bingo and raffles. However, even the number of games and prizes allowed to be awarded are minimal.

It wasn’t until 2005 that the state even legalized the lottery, one of the latest in America to do so.

When Congress passed the Indian Gaming Regulatory Act of 1988, the North Carolina was forced to work with the Native American tribes in its state that wanted to offer some form of gambling on their reservations. As it turned out, the Eastern Band of Cherokee Indians did want to do so, and they negotiated with the state for a full gambling compact that allowed them to offer everything from slot machines to table games, video poker, and keno. The Cherokees do operate one bingo parlor and one full casino/resort in partnership with Harrah’s.

The state’s statutes define gambling and other related terms in Chapter 14, as well as the penalties for illegal gambling. The law specifies that even social gambling is prohibited, and any house of entertainment or house “wherein alcoholic beverages are retailed” could also be in violation of the law.

The only section that mentions any type of gaming involving skill is included in prohibited games:

“A video game based on or involving the random or chance matching of different pictures, words, numbers, or symbols not dependent upon the skill or dexterity of the player.”

There have been no efforts from lawmakers in North Carolina to consider any type of legalized online poker, casino games, or sports betting. The state did allow lottery tickets to be sold online by way of a subscription service, but it was a minimal expansion of the lottery.

There was a bill in 2017 to legalize and regulated paid-entry fantasy sports games, but it did not make it to a vote in the legislature, and there is no follow-up bill thus far in 2018.

Some representatives of North Carolina have been involved in efforts to work toward passage of the Restoration of America’s Wire Act (RAWA), which would essentially ban online gambling on the federal level and roll back all state laws. The bill seeks to overturn the 2011 decision by the Department of Justice to reinterpret the Wire Act, but it has yet to gain much momentum in Congress. No North Carolina legislators are currently proposing a RAWA-type bill.

On March 7, 2019, House Bill 302 was brought forward to enable wagering on sporting events on tribal lands. Any sports betting would have to be in accordance with the underlying tribal-state gaming compact. Under the bill, wagers would be permitted on both professional and college sports. On July 30, the governor of signed the sports betting bill into law! Online sports betting is still illegal for the time being and will be next on the table.

Players in North Carolina do have access to sites offering real-money online gambling.

There are no indications that North Carolina is considering an online gambling crackdown, either by bringing charges against the sites or requiring internet service providers to block them. It would not be surprising, considering the views of the state regarding gambling in general, but prosecution would be complicated because the sites are based outside of the United States.

This is a very unlikely scenario. If law enforcement officials choose to pursue the operators, they would probably not include players in the effort due to the thousands of people who play online every day from North Carolina. The task would be massive, expensive, and reflect very negatively on the state.

A: The sites with which we work are all licensed in various jurisdictions around the world and abide by certain rules to maintain their standing. This means they keep player funds separate from operating money within the company, ensuring that player accounts are safe in any situation. If a site leaves a market or shuts down completely, players should be able to withdraw their funds in a timely manner.

A: Players have many options when it comes to putting money on and taking it from an online gambling or sports betting site. Each site offers different available methods, though, so players should check their favorite sites for more information. Most sites do offer some type of debit or credit card option, as well as a bank transfer or wire, or an ewallet for deposits. And for withdrawals, there are few options but checks by courier are standard for American players. Bitcoin is the new method that most sites now offer, and it is typically the only one that allows both deposits and withdrawals via the same method. Talk to a customer service agent at your site of choice to find out more.

Are there any land-based casinos in North-Carolina?

Yes, but there are only two casinos in the state of North-Carolina.