There is no wording in Oklahoma law that specifically addresses online gambling as legal or illegal.

Located in the southern-central part of the United States, Oklahoma is surrounded by Arkansas, Missouri, Kansas, Colorado, New Mexico, and Texas. 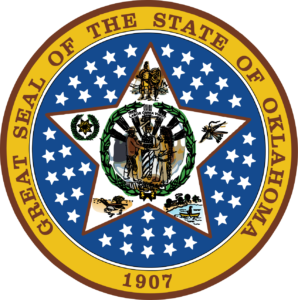 Oklahoma has long been a home for horse racing and pari-mutuel betting, though the lottery did not receive approval until many years later when voters allowed it in 2004. Even then, it didn’t open for business until two years later.

When Congress passed its Indian Gaming Regulatory Act (IGRA) in 1988, many of Oklahoma’s Native American tribes took an interest. The ability to open gambling establishments meant more revenue and opportunities for their reservations. While IGRA allowed tribes to create compacts with their respective state governments, Oklahoma put it to a ballot vote in 2004, at which time the public voted to allow the new compacts to be negotiated. From that point, nearly 30 tribes negotiated compacts, and more than 80 facilities are open today. Some are small bingo centers or card clubs, while others are fully-functional casino/resorts scattered throughout the state.

All of the gambling statutes, along with the corresponding penalties for breaking those laws, are listed in Title 21 of the statutes. The text defines terms like bets, gambling devices, and the dissemination of gambling information. In the latter, one of the interesting points pertains to installing communications facilities for gamblers “knowing that they will be used principally for the purpose of transmitting information to be used in making or settling bets.” This is likely aimed at bookmaking but remains unclear.

As for games of chance, all it takes is for one party to believe the results depend on chance. Oklahoma’s definition of a bet lays it out by listing its meaning as:

There have been no attempts by Oklahoma legislators to legalize online gambling with the sole exception of daily fantasy sports (DFS), which was put up for a vote in 2016 but did not pass.

On the other hand, there is a bill in the legislature that would give tribes the authorization to offer sports betting via their casinos should the US Supreme Court rule in favor of New Jersey in a pending case. A decision for New Jersey would allow each state to regulate sports betting as it chooses, and the bill in the Oklahoma legislature may be on hold until the outcome of the case is known.

Meanwhile, one of the tribes with a compact, the Iowa Tribe of Oklahoma, has been trying to launch an online poker website without amending its gaming compact. The effort began in 2015 with an announcement that it was launching free-play online poker that would eventually become a real-money poker site for international players and those in states with regulated poker like Delaware, Nevada, and New Jersey. The tribe also wanted to welcome users on airplanes and cruise ships.

The state of Oklahoma’s Gambling Compliance Unit declared the site illegal, but the tribe sued, and the US District Court for the Western District of Oklahoma ruled for the Iowa Tribe that they could move ahead with the PokerTribe website.

The victory could have been significant if the tribe hadn’t partnered with Universal Entertainment Group for the launch, a controversial company with an owner embroiled in scandal. PokerTribe did obtain a conditional gaming license from the Isle of Man in early 2017, but it appears that the conditions have not been met thus far.

Other news from the endeavor was that Universal was going to acquire the tribe’s online gaming assets, but that appears to have been delayed as well. In addition, the Cheyenne and Arapaho Tribes of Oklahoma filed a lawsuit against Universal’s aforementioned owner for having cheated the out of $13 million in a similar online poker deal.

As of the beginning of 2018, there were no updates about the site’s launch or any legal matters pertaining to the Iowa Tribe, Universal, or PokerTribe itself. The Oklahoma’s legislative session ended with no action being taken on the aforementioned.

Yes. There are numerous sites offering online gambling and betting to Oklahomans.

Oklahoma does not seem likely to want to exert energy and resources to pursue online gambling operators that are licensed and based outside of the US. If they wanted to do anything, they might try to use internet service providers to block those sites’ access to Oklahoma residents, but that seems very unlikely as well.

No. While the chances of Oklahoma pursuing charges against online gambling operators is slim, there is even less of a chance that there will be any charges levied against players themselves. The process of identifying the players would be arduous, expensive, and unprecedented, as players are almost never targeted in gambling crackdowns.

Yes. If a site withdraws from a particular market like Oklahoma, notices will be sent, and players will have ample opportunity to withdraw their funds. Should a site close completely, there are regulations in place via licensing for the operators that require them to keep player funds safe and separate from all other company money, which will make it available to pay players.

Each site has its own set of cashier options, but most sites offering services to US players do offer similar methods of depositing money. Debit and credit cards are typically an option, as are bank wires or transfers and ewallets. Withdrawals are typically limited to check by courier and possibly one other method of transferring funds. Many sites now also offer bitcoin, as the cryptocurrency is quite popular with online players. Bitcoin is the only option available for both deposits and withdrawals, which makes it even more appealing. Check with your favorite site for details.

Are there any land-based casinos in Oklahoma?

Yes. There are 70 casinos in fact across the state of Oklahoma. It has become one of the new place sfor casino gaming and horse racing thrills. Here’s a closer look at the top three casinos: