Rhode Island was one of the first to offer sports betting to its residents after the repeal of PASPA in the beginning of 2018. Currently, mobile sports betting has made the cut but there are still no laws in place stating whether online casino gambling and poker is legal or illegal in Rhode Island.

Rhode Island is part of the New England area of the United States, and it is the smallest state of them all. The Atlantic Ocean comprises some of its border, as do Connecticut and Massachusetts. 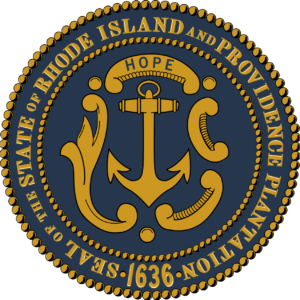 The standard forms of gambling allowed in most states are available in Rhode Island. The lottery and keno have long been allowed, as well as games like bingo for charitable organizations and events. There are also horse race tracks in the state for on-track pari-mutuel betting.

A 1992 law allowed the tracks to expand into racinos by installing video lottery terminals, which are similar to slot machines but feed into one system controlled by the state’s lottery. The Rhode Island facilities were also allowed to install video blackjack machines.

Fast forward to 2012 for another expansion. The voters approved a referendum to allow racinos to add table games to their establishments, and installing setups for games like poker helped the racinos compete with other surrounding states for gambling customers.

The Rhode Island statutes detail games like bingo, lottery, and horse betting, but the wording is sparse when it comes to definitions for gambling and games of skill. The wordy explanation for prohibited gambling calls out “any lottery, chance, game or device of any nature or kind whatsoever,” which doesn’t do much for a clear understanding of the law.

Games of chance are only mentioned in reference to bingo and beano, and they must be played according to charitable gambling rules. The closest thing to a definition provided is:

The racinos have expanded in Rhode Island in order to compete with those in neighboring states. With the addition of table games several years ago, the facilities have since expanded to casino/resorts.

Online poker and casino games were considered briefly in 2014 due to the actions of states like Nevada, Delaware, and New Jersey at the time. All three had new markets and revenue streams to boost casino

revenue, and there was some support for Rhode Island to do the same. However, it never developed into the voter referendum that was needed for the constitutional amendment.

In 2017, lawmakers did consider a bill for Rhode Island to legalize daily fantasy sports (DFS). And despite the passage of similar laws in other states, the bill did not move through the Rhode Island legislature.

The Twin River Casino in Lincoln opened its doors for legal sports betting on Nov. 26, 2018. Only two locations would be allowed to offer sports betting under the law, with the state’s lottery providing regulatory oversight. In addition, in early 2019, the law was tweaked to provide for mobile betting.

There is little interest for Rhode Island officials to pursue charges against online gambling sites that are based offshore. While the state police regularly monitor charitable gaming, actions against websites that provide various gambling opportunities would be a costly and convoluted scenario that Rhode Island does not seem to be keen to pursue.

No. The law may sound tough on charitable gaming violations, but even in those cases, law enforcement is looking for rogue operators and not game participants. Even if Rhode Island pursued offshore sites, the players would not be in danger.

The licenses under which the sites operate have numerous stipulations, one often being that operators separate player funds from monies used for general operating expenses. This ensures that in case of a site closure, players will receive their rightly-earned account balances. Should a site merely leave a state market or even the US altogether, players will be given ample opportunities to withdraw their money in a timely manner.

Each site that we recommend has a different set of deposit and withdrawal options. For many of them, players can choose from methods like debit cards, credit cards, ewallets, bank wires, and bank transfers for depositing money into an account. Withdrawals, however, may be limited to one or two options, such as a check. Bitcoin is working its way into online gaming, however, and is a solid option for both deposits and withdrawals. Check with the site of your choice for the options, and feel free to work with a customer service representative to find a method that works for you.

Are there any land-based casinos in Rhode Island?

Yes. There are only two state licensed casinos in Rhode Island.