West Virginia became the fifth state to legalize and offer online sports betting, however, they are rather slow when it comes to the rolling out process. Currently, only mobile apps offered by land-based casinos or sports betting operators are legal.

Online gambling and sports betting are not mentioned in the current state statutes as illegal.

West Virginia is located in the Appalachian region of the United States, bordered by Virginia, Kentucky, Ohio, Pennsylvania, and Maryland. 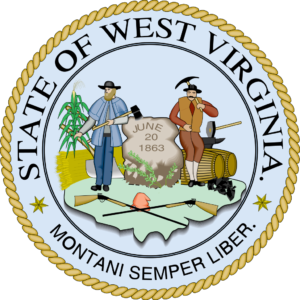 There is more legal gambling in West Virginia than many might think. The lottery began in the mid-1980s, and non-profit organizations have been offering bingo and similar games for decades. Horse and dog racing, complete with pari-mutuel betting, have also been staples in the state for many years.

But in 1994, the racetracks were authorized to install video lottery terminals, also known as VLTs. This recategorized them as racinos, and the machines – similar to slot machines – drew more customers after they were installed in 1995. The legislature then expanded the VLT law to allow them at more locations, such as bars and fraternal organizations.

By 2007, the racinos wanted more, so legislators allowed them to offer table games. The racinos grew into fully functional casinos over the past 10 years, with everything from poker to gaming machines, hotels and restaurants.

While the state laws offer details for the legalized forms of gambling, the criminal code is fairly scant with regard to prohibited games and their definitions. In fact, there are no definitions for terms like gambling and games of chance. What it does detail are illegal activities, like keeping gambling tables without a license and serving as a doorkeeper for a gambling establishment.

The most interesting part of the legal code is that cheating at gambling is strictly prohibited:

“If any person playing at any game, or making a wager, or having a share in any stake or wager, or betting on the hands or sides of others playing at any game or making a wager, shall cheat, or by fraudulent means win or acquire for himself or another, money or other valuable thing, he shall be guilty of a misdemeanour, and, upon conviction, shall be confined in jail not more than one year and fined not less than five times the value of the money or thing won or acquired.”

For most of the past decade, lawmakers have shown little interest in expanding gambling in West Virginia beyond its current status and five casinos.

However, there is one lawmaker that took note of internet poker and casino games in nearby states like New Jersey and the law just passed in 2017 to do the same in Pennsylvania. State Delegate Shaun Fluharty knows that his state could benefit from the additional revenue, and online gaming could the casinos as well. He introduced an online gambling bill to that effect in 2017, and though it didn’t garner much attention then, he carried it over to 2018 and intends to lobby for it.

Meanwhile, legislators in West Virginia took a look at a fantasy sports bill in 2016 but chose not to legalize those paid-entry games at that time.

On Aug. 30, 2018, West Virginia became the fifth state to offer legal and regulated sports betting. The move came six months after the West Virginia legislature passed a new bill with the West Virginia Lottery Commission serving as the chief regulator. Both in-person and online sports wagering are permitted under the law.

In other news, on March 9th the West Virginia online casino bill becomes law. Under this legislation, the West Virginia Lottery has until June 2020 to finalize initial rules for licensing and regulation of online gaming. That means, it could launch by late 2020 at the earliest but that’s only an estimate at this point.

West Virginia players have a number of options for real-money internet gambling.

There is little chance that West Virginia will take any significant action against internet gambling sites that are based outside of the US. And even taking steps toward trying to block sites by enlisting the help of internet service providers is unlikely, as such a move may motivate civil rights and internet rights activists to take legal action against the state. All of it would be costly and likely not worth the effort.

No. There have been no instances of states, even ones that are outwardly and strictly anti-online gambling, making an effort to pursue and prosecute players. It would be an unprecedented move and unlikely, as there are thousands of West Virginians gambling online every day.

There are no guarantees, but the sites we recommend have been stable and trustworthy members of the online gaming community for well over a decade. They cater to players in various places around the world and practice safe accounting practices, as required to do by their licensing agreements. Regulators ensure that player funds are kept separate and safe by operators so players needn’t worry.

Players in West Virginia have numerous options for depositing funds to an online poker, casino, or sports betting account. While all banks may not process wire transfers, most debit and credit cards are allowed, as well as some e-wallet services. As for deposits, most of them must be done by check, but those are typically processed within one to two weeks. Meanwhile, many players have found that bitcoin, the most popular form of cryptocurrency, is the best method to use, as it works for deposits and withdrawals. The added benefit of anonymous transactions is also something that many players like. Check with your favorite site and ask a customer representative which method would work best for you.

Does West Virginia have land-based casinos?

Yes, there are many land-based casinos in the state of West Virginia. Here is a look at the top three casinos: