The Indiana Code and Gambling Control Division make it very clear that online casino and poker gambling are not permitted in the state. However, in late October 2019, online sports betting became available and now make up a big amount of gambling revenue.

Considered a part of the Midwest United States, Indiana is in the northern section in the Great Lakes region. Lake Michigan touches it on the north side, as does the state of Michigan, and Ohio is to the east, Kentucky to the south, and Illinois to the west. 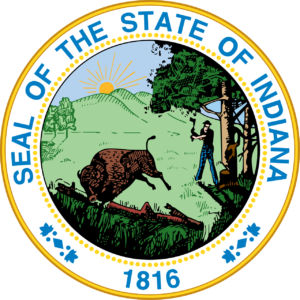 Indiana was slow to approve many forms of gambling, but its residents voted for the lottery in 1988 and riverboat casinos several years later. The first full-fledged riverboat casino, complete with slot machines and table games, set up shop in Evansville in 1995. By 2002, there were nearly 10 of them with more waiting to open. A 2002 change to the law erased the requirement that riverboats move on the water, which essentially allowed for land-based casinos. There are 14 and counting now open throughout the state.

In addition, the Indian Gaming Regulatory Act (IGRA) passed by Congress in 1988 opened the doors for Native American tribes of Illinois to set up gambling establishments on their reservations. The Pokagon Band of Potawatomi Indians were the first to negotiate such a compact with the state, and there are now more than a handful of Indian-run casinos in Indiana.

Even more gambling expansion brought video gaming terminals to existing race tracks in 2006. The installation of those machines classifies tracks now as racinos.

With the plethora of gambling available, it is somewhat surprising that there isn’t more of a push for internet gambling. In fact, the opposite is the case in Indiana, where the law specifically outlaws interactive gambling in Title 35.

First, the state code defines gambling as any operation with money or property won as a result of any element of chance. Further, those who engage in pool-selling, bookmaking, maintaining slot machines, running lotteries or numbers, running banking or percentage games with dice or cards, and accepting money risked in gambling for profit are guilty of “professional gambling.”

Professional gambling also includes operators who “knowingly or intentionally” use the internet to make gambling accessible to Indiana residents and anyone who conducts “banking or percentage games played with the computer equivalent of cards, dice, or counters.” These are felonies in the eyes of the law.

The prosecuting attorney must give any accused operator a 30-day notice to cease and desist.

To further clarify its stance on games of chance, the Indiana Gambling Control Division addresses it in the FAQ section of its website. Card games like and including poker are considered games of chance per the law of Indiana as follows:

“A card game or an electronic version of a card game is a game of chance and may not be considered a bona fide contest of skill.” “Thus, games like poker and euchre are considered gambling if played for money.”

While the Indiana legislature is not keen on online poker and casino games and seems to be nowhere near considering their regulation through legalization, they are open to other forms of gambling.

In 2015, lawmakers first introduced bills to legalize sports betting and daily fantasy sports in connection with existing racinos. Those proposals never even received positive committee consideration. While sports betting continued to stall in the following years, DFS was legalized in 2016.

On May 8, 2019, Indiana Governor signed into a law a bill that would legalized sports betting in the Hoosier State as early as August. The new law allows for both mobile and in-person wagering. Governor Eric Holcomb placed the first wager September 1st 2019. Mobile wagering was finally approved on October 3rd 2019. Wagering on college and pro sports is permitted under the new law, but betting on esports and high school sports is still currently banned.

In the fall, Indiana joined the other states in the mix and made sports betting legal. At the time, only retail sports betting was made available by law. But that did not last long and by the end of October 2019, lawmakers pushed for mobile and online sports betting which now makes up in large part the gambling revenue for the state of Indiana.

There are several online gaming and betting sites open to players in Indiana.

While the laws are strict against online gambling, there is no indication that law enforcement is going to pursue charges against offshore gaming operators. However, it remains a possibility, depending on the administration in charge.

Any prosecution of operators or banning of online gaming or sports betting websites should not affect players and not result in any charges against individuals, despite the law’s definition of professional gamblers.

If any sites are blocked by the state of Indiana through internet service provider restrictions, players will be notified and have a chance to transfer or withdraw their funds. The sites we recommend have a long history of taking care of players, and actions by Indiana are not likely to change that.

Each site has its own list of deposit and withdrawal options for their players. Typically, debit and credit cards are viable methods, though those depend upon the banks issuing the cards and whether they permit transactions with online gambling and betting sites. There are other methods as well, however, such as ewallets and bank transfers. Most withdrawals take place by checks. Players familiar with cryptocurrency, however, will be surprised at how many sites now accept bitcoin, which can be used for deposits and withdrawals. Check your preferred site for more information, and a customer service representative can answer any questions.

Are there any land-based casinos in Indiana?

Yes, the state of Indiana has approved land-based and riverboat casinos. Here is a look at the top three: