Maryland has many options when it comes to online gambling, with a large number of casinos, sportsbooks and poker operators offering services to Maryland residents. On this page, we’ll guide you through the better options for MD players, provide some history on online gambling within the state, as well as answer some frequently asked questions. 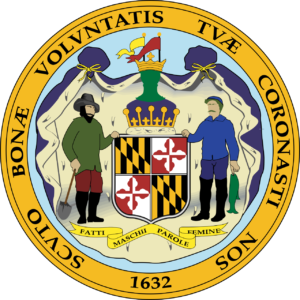 Maryland is located along the eastern coast of the United States, with Pennsylvania to its north, Delaware on its eastern border, and Virginia, West Virginia, and Washington D.C. on the south and west sides.

For many decades, the residents of Maryland have been able to go to the horse racetrack, participate in pari-mutuel betting, and play the lottery. That seemed to be enough for everyone, including lawmakers.

But in 2007, after pressure from the racetracks to add slot machines to their venues, the voters of Maryland were given the referendum. They voted to allow those machines, and the first ones were unveiled in 2010, giving the tracks an upgrade to racinos. Several years later, table games were added. And expansion continued until six casinos were fully operational, complete with slot machines and table games like poker. The state became a gambling destination in the eastern US.

The details of the laws and penalties for violating them are in the Maryland statutes, mostly combined into Titles 12 and 13. While they omit general definitions for gambling and other standard terms, but the prohibitions are clearly listed and include playing games like keeping a gaming device, profiting from a gaming device, gambling on a vessel or over water, and accepting credit from another person in order to play a gambling device.

Maryland’s official website, one that details the powers given to the Maryland State Lottery and Gaming Control Agency, addresses electronic gaming devices, in that they are unlawful but not defined in the most detailed way. Games are not specified and not given a distinguishing mark of chance or skill. The section merely calls out the following:

“All electronic gaming devices, regardless of whether the device delivers a game through the internet or offers internet or other services.”

Maryland has been expanding gambling for the better part of the last decade, but it is unclear if the movement will continue.

In 2012, there were rumors of an online gambling bill that was discussed by Maryland House legislators at

a caucus meeting. The state saw that Delaware and New Jersey were moving forward with online poker and casino games, and Maryland considered joining them. However, the bill never made it into the larger gambling expansion bill at the time, and it has not been introduced since.

There are many industry analysts, however, who believe internet gambling is a serious possibility in the coming years. One reason is that New Jersey has shown tremendous success with its online operators partnering with land-based casinos to boost revenue and compliment gaming options. Another reason is that Pennsylvania legalized its own online gaming in 2017 and is likely to launch their sites in 2018. As Maryland casinos compete with those in neighboring states for tourists’ gambling dollars, and as several states combine their player pools for online poker liquidity and shared progressive slot jackpots, Maryland could view itself as being left behind. In order to stay competitive, lawmakers could decide to reconsider the idea sooner rather than later.

It should also be noted that other states in the area – Connecticut, West Virginia, Massachusetts, and Michigan – have online poker or gaming bills under consideration in 2018.

Meanwhile, lawmakers in Maryland are currently considering some new forms of gambling after SCOTUS legalized the sports betting bill proposed by New Jersey.

In addition, there is a law pending in the halls of the state legislature to regulate online daily fantasy sports (DFS), as well as to allow it at kiosks in addition to casinos and racinos. The current law already exempts DFS and other “online fantasy competitions” from current gambling-related penalties, so the law would merely legalize the games and allow for statewide regulation.

Most of our recommended gaming sites offer services to players located in Maryland.

Maryland has never given any indication that it wanted to allocate money for law enforcement to investigate the possibility of prosecuting internet gambling or sports betting sites that are based outside of the US. There is little chance that there will be any type of legal enforcement pursued in the near future.

The most players should worry about is that a site will leave the Maryland market, but that is only likely to happen if Maryland legalizes online games and regulates its own sites. Even if law enforcement pursued some of the offshore sites, there is little to no chance that players were find themselves in any legal jeopardy whatsoever.

A site leaving a market will ensure that ample time is given for players to withdraw their money before they’re no longer able to access the site. If a site shuts down, they are required to keep player funds in a separate account from operating monies, meaning player money is safe and will be paid.

Are there land-based casinos in Maryland?

Yes. In fact, that state of Maryland is home to 15 of the top casinos.